This injury is a tearing of the ACL ligament in the knee joint. The ACL ligament is one of the bands of tissue that connects the femur to the tibia. An ACL tear can be painful. It can cause the knee to become unstable.

What Is the ACL? 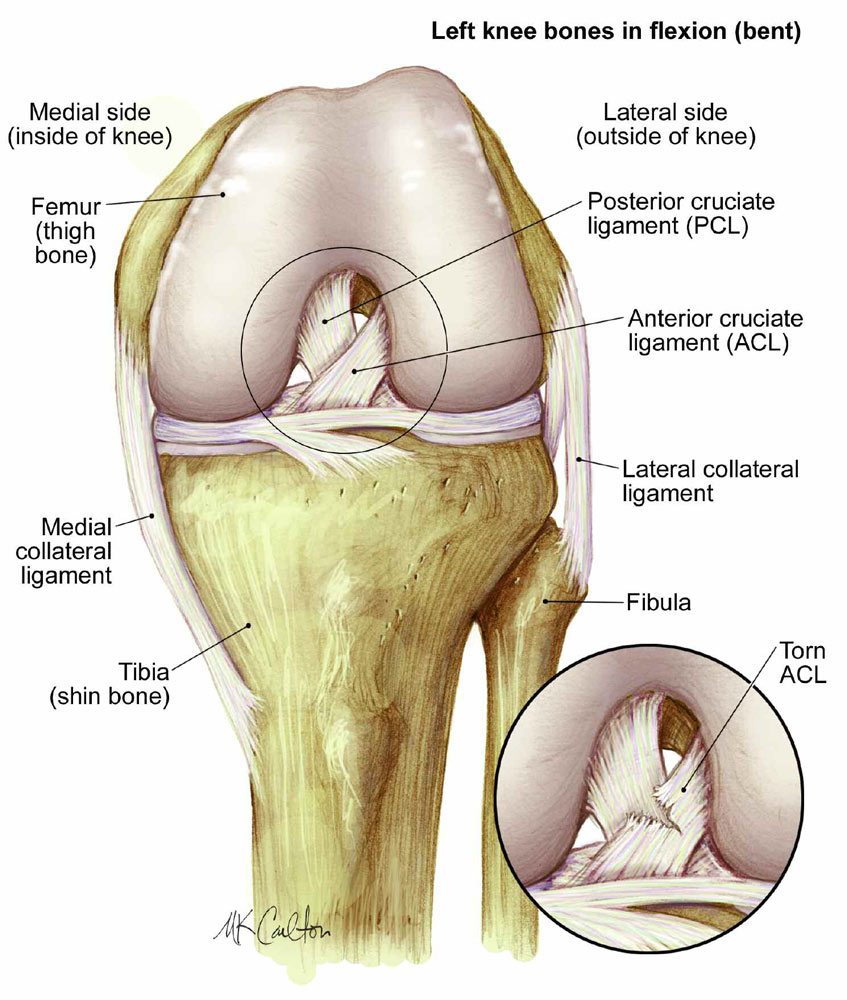 How Is the ACL Injured?

One of the common ways for the ACL to be injured is by a direct blow to the knee, which commonly happens in football. In this case, the knee is forced into an abnormal position that results in the tearing of one or more knee ligaments.

However, most ACL tears actually happen without contact between the knee and another object. Such noncontact injuries happen when the running athlete changes direction or hyperextends their knee when landing from a jump. These movements are common to all agility sports.

What Are the Signs of an ACL Tear?

In many cases, when the ACL is torn, you will feel the knee give way with an audible “pop.” The injury is usually associated with a moderate amount of pain and continued activity is usually not possible. Over the next several hours, the knee becomes very swollen and walking becomes difficult. The swelling and pain usually increase over the first two days and then begin to gradually subside.

How Is an ACL Tear Diagnosed?

Discomfort after an ACL tear is usually severe enough that the injured person will seek medical attention. The physician will examine the knee, and, in most cases, be able to identify which ligaments are injured. However, there may also be injuries to the joint surface that are more difficult to diagnose. At times, swelling may make it difficult to diagnose a tear. This will necessitate the use of an MRI scan or arthroscope to ensure that an accurate diagnosis is made.

Will I Need Surgery?

The most frequent question after an ACL injury is “Will I need surgery?” The answer varies from person to person. Many factors must be considered by the patient and the physician when determining the appropriate treatment. These factors include the activity level and expectations of the patient, the presence of associated injuries (cartilage tears, etc.) and the amount of abnormal knee laxity.

In either scenario, rehabilitation of the knee begins with exercises to help restore full range of motion. This is followed by strengthening exercises for the muscles around the knee. Return to sports with or without a brace is allowed only after leg strength, balance, and coordination have returned to near normal.

How Are ACL Tears Treated Surgically?

Many different surgical approaches have been developed for the ACL injured knee. Years of experience have shown that simply stitching the ligament together is rarely successful. Therefore, current techniques involve reconstructing the ACL by building a new ligament out of tissue harvested from one of the other tendons around the knee or from an organ donor. This tissue is passed through drill holes in the thigh bone and shin bone and then anchored in place to create a new ACL. Over time this graft matures and becomes a new, living ligament in your knee.

What Happens After Surgery?

Rehabilitation of the knee after ACL reconstruction requires time and hard work. Time off from work varies depending on job type. Desk job employees can return in one or two weeks, whereas construction workers usually are not able to return for approximately three to six months. The same is true for athletes. The rate of rehabilitation may take even longer, depending on the specific requirements of the individual’s sport/activity and rate of recovery.

The overall success rate for ACL surgery is very good. Many studies have shown that over 90 percent of patients are able to return to sports and workplace activities without symptoms of knee instability. Although some patients do complain of stiffness and pain after surgery, these problems have been minimized by current surgical techniques and aggressive rehabilitation.

The anterior cruciate ligament (ACL) is one of the most commonly injured ligaments in the knee. Approximately 150,000 ACL injuries occur in the United States each year. Female athletes participating in basketball and soccer are two to eight times more likely to suffer an ACL injury compared to their male counterparts. Recent data from the Women’s National Basketball Association indicates white European-American players may be at increased risk for ACL injury compared with African-American, Hispanic or Asian players.
Athletes who have suffered an ACL injury are at increased risk of developing arthritis later on in life, even if they have surgery for the injury. ACL injuries account for a large health care cost estimated to be over half-billion dollars each year.

Why Do ACL Injuries Occur?

Researchers believe there are external and internal factors associated with ACL injury. External factors include any play where the injured athlete’s coordination is disrupted just prior to landing or slowing down (deceleration). Examples of a disruption include being bumped by another player, landing in a pothole, or a ball deflection. Other external factors which have been studied include the effect(s) of wearing a brace, shoe-surface interface (how certain types of athletic footwear perform on different surfaces), and the playing surface itself.

Internal factors include differences in the anatomy of men and women, increased hamstring flexibility, increased foot pronation (flat-footed), hormonal effects, and variations in the nerves and muscles which control the position of the knee. Anatomical differences between men and women, such as a wider pelvis and a tendency towards “knock knee” in women, may predispose women to ACL injury. Differences in ACL injury rates between men and women seem to begin shortly after puberty because the nerve/muscle system (coordination) adapts at a slower pace than the anatomical and hormonal changes. It is possible that the incidence of injuries in women increases at this age because the nerve/muscle system (coordination) adapts to these changes at a slower rate than in men. Women also tend to have knees that are less stiff than men, placing more forces on the ligaments. In addition, the female hormone estrogen may relax or allow stretching of the ACL, thereby predisposing female athletes to ACL injury. Nerve/muscle factors pertain to the interaction and control of the knee by the quadriceps and hamstrings muscles in the legs. Researchers are very interested in studying this particular factor since it may be the easiest to modify.

How Do ACL Injuries Occur? 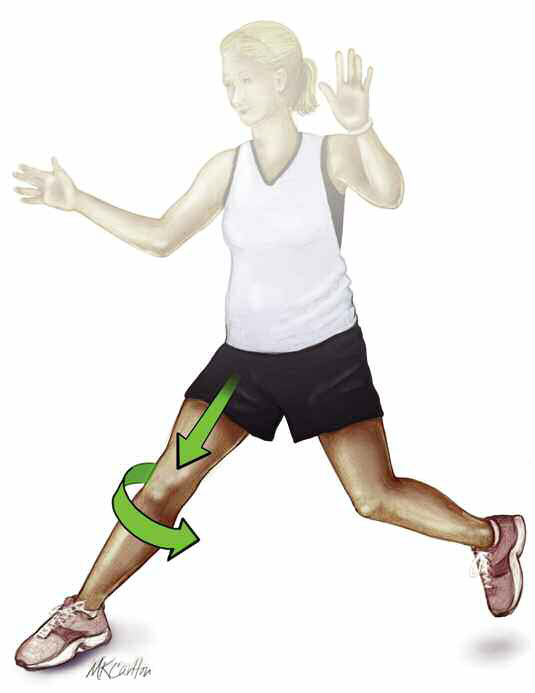 Careful study of videos of athletes tearing an ACL show that approximately 70 percent of these injuries are noncontact and 30 percent occur during contact. The noncontact injuries usually occur during landing or sharp deceleration. In these cases, the knee at the time of injury is almost straight and may be associated with valgus (inward) collapse (see Figure 1). The athlete often lands with a flat-foot position and the leg is placed in front or to the side of the trunk.

Several prevention programs have been developed in an attempt to decrease the incidence of noncontact ACL injuries. The focus of current prevention programs is on proper nerve/muscle control of the knee. These programs focus on plyometrics, balance, and strengthening/stability exercises.
Plyometrics is a rapid, powerful movement which first lengthens a muscle (eccentric phase) then shortens it (concentric phase). The length-shortening cycle increases muscular power. An example would be an athlete jumping off a small box and immediately jumping back into the air after contact with the floor.
Balance training commonly involves use of wobble or balance boards. On-field balance exercises may include throwing a ball with a partner while balancing on one leg.
To improve single-leg core strength and stability, athletes perform exercises such as jumping and landing on one leg with the knee flexed and then momentarily holding that position. 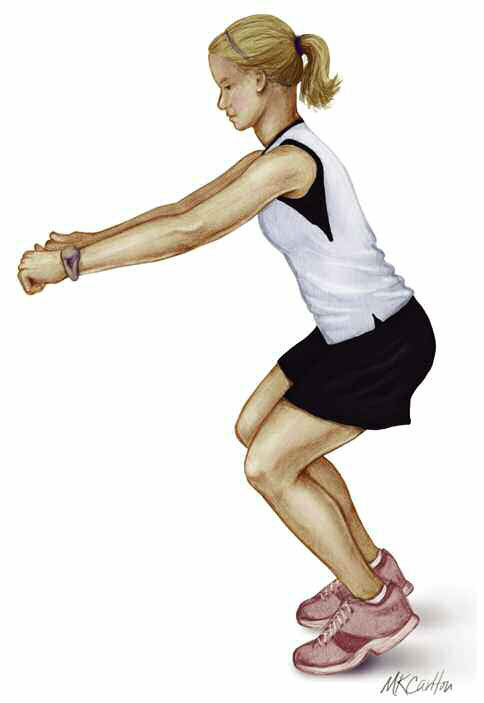 High-intensity plyometrics may be key in reducing the number of ACL injuries. To be most successful, plyometric training should be performed more than once per week for a minimum of six weeks. Athletes are taught proper landing techniques which emphasize landing on the balls of the foot with the knees flexed and the chest over the knees (see Figure 2). The athlete should receive feedback on proper knee position to prevent inward buckling. Many of the newer programs are being adapted by coaches as an integral part of warm-up during practice, such as jumping over a soccer ball and landing in the correct position.